We were delighted a week ago when Marcus Roberts, Founder and Director of Jtrails contacted us to offer further information for use on the GenPals Cemetery Project website, which we hope to be able to add soon.

Marcus supplied the definitive identification for the Northampton Stone in 1992, the only known example of a medieval Jewish tombstone in England.

The stone is on display at Northampton Museum and a couple of days ago the Northampton Chronicle and Echo reported that an archaeological survey of the site of the 13 century cemetery has begun. It is believed that the cemetery was in the town centre between 1259 and 1290. This is obviously a site of huge importance to Anglo Jewry.

There have been reports of a handful of other medieval Jewish stones, such as the one found in London Wall as described in Gentleman's Magazine in 1753, the original sketch of this stone is held at the British Library but sadly they all seem to have been lost, or have disappeared over the years.

For those readers who are able to get to the Northampton Museum, both the Northampton stone and their display on Medieval Jewish Northampton is well worth the visit.
Posted by CemeteryScribes.com No comments: Links to this post

Frank Gent is one of the great servants of Anglo-Jewish Genealogy. It is thanks to him that, following the untimely death of that great proponent of Anglo Jewry, Rabbi Dr. Bernard Susser, that the latter's considerable legacy of Jewish Record transcripts, and other material, was not only saved for posterity but was catalogued and published on the Internet

Frank is currently recovering from serious health problems and, with his usual enthusiasm and determination, is planning to complete a 300 Mile Bike Ride from London to Paris in 2010 in aid of medical Research see here for details.

This would seem like a good opportunity for all of us in the world-wide family of Anglo-Jewish Genealogy to say a small thank-you to Frank for his invaluable contribution to our research whilst, at the same time, contributing to a very worthwhile cause.

All the best, Frank. We know you'll make it. And in record time, too!

To read more about Frank's build-up to the big event and to offer him your support, click here

Angela's databases of Synagogue Records etc., can all be downloaded from the British Jewry website She still has a few copies of the printed version which she would be happy to send for the cost of postage and packing only. Please use the contact us or leave a comment if you are interested in receiving a copy.

.
Posted by CemeteryScribes.com No comments: Links to this post

The recent Bank Holiday gave me the opportunity to catch up on some reading, one particular book stands out as being of great interest to visitors of GenPals.com

We receive numerous enquiries from genealogists in Australia looking for their ancestors' burial places in the UK. This book sheds another light on the lives of those transported to Australia and what provisions were made for the families they were forced to leave behind.

The Jews has been specifically exempted from the provisions of the 1753 Marriage Act. The effect of this exemption was to put the matrimonial causes of the Jews of England exclusively in the hands of their Rabbis and Dayanim for the next hundred years. No Bet Din (Jewish ecclesiastical court) anywhere in the world has left such a complete record of its transactions - matrimonial and proselytical - as that contained in the extant Pinkas (minute - book) of the London Bet Din from 1805 to 1855.

In all other matters, including the offences punishable by transportation, Jews were subject to the civil courts. Of the estimated 150,000 convict transportees shipped to the Australian penal colonies, some seven hundred were Jews. Matrimonial and related matters involving twenty of these miscreants are recorded in the Pinkas. Jeremy Pfeffer recounts the history of the London Bet Din during these years as revealed in the Pinkas record and relates the previously untold stories of this group of Jewish convict transportees and their families.

Jeremy Pfeffer writes in the preface 'I set out to discover eveything I could about convict transportees whose names appeared in the Bet Din records, the circumstances that led to their trials and convictions and the stories of their first years in their new Australian home'. He has succeeded in producing an account that is both scholarly and accessible and which brings the past to life through the true stories of ordinary people.

.
Posted by CemeteryScribes.com No comments: Links to this post

Queen Victoria arrived in Berlin early in the morning on 24th Apr 1888 to visit her daughter. Soon after she heard the news that:
"Poor good Kanne, who had a relapse a week ago after having recovered wonderfully from the first attack in March had become much worse and was in great danger" an hour later the Queen was advised of his death at his private residence in Dover Street, London. She wrote "for thirty years he had attended me on all my journeys, making all the arrangements in a most admirable manner. He used to think of every little thing for my pleasure and comfort and had a wonderful power of organisation. I can hardly realise that he is gone and he will be such a loss. All my children and people are so grieved".

Joseph Julius Kanne, the Queen's invaluable courier, director of her continental journeys was the son of Josephine Loewenfeld and Leopold Kann.

An article by Paul H Emden in the Jewish Chronicle 3 Oct 1947 tells that Josephine was the daughter of Moses Loewenfeld of Schoenwald who owned a distillery there. While Leopold's family were originally from Frankfort a Main, a wealthy and influential family.

Josephine and Leopold lived in Pilsen, after Leopold's death Josephine moved to Prague. She died in 1874 and was buried in the Jewish Cemetery there.

Joseph J Kanne was born about 1818 in Austria, he took British naturalisation in 1864 having seen active service in the Crimean War and had been present at the siege of Sebastopol.

His epitaph reads: This stone was erected by the Queen and the Prince of Wales to mark their appreciation of the long and valued services of Joseph Julius Kanne. In memory of Joseph Julius Kanne, for nearly 40 years one of Her Majesty's most devoted servants. Died 24 April 1888 aged 70 years.

The London Gazette reported on 26 Jun 1888 that probate was granted on 13 June to Achille Vintras of Hanover Square, Doctor of Medicine. Dr Vintras was the founder of the French Hospital in London.

Posted by CemeteryScribes.com No comments: Links to this post 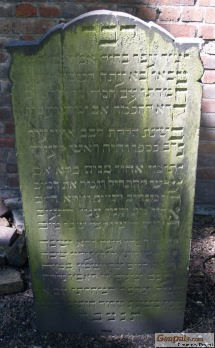 Well here goes with my first 'real' post. Its about an intriguing headstone we found at Brady Street. One of the more difficult to interpret as it included an Acrostic and a Gematria.

The inscription was transliterated as:
Creature of earth in his mother's bosom... His gathering comes now ...
His fineness with those who lack ...
Calling wisdom father and running from evil.
In the year 5538 [1788], he awakened the heart of his brothers, donated his money and was the head/chief to help.
The orphans of his brothers, fatherless children;
Joyous to begin and finish with bounty, running from contributor to contributor, calling out,
'Your brother is dead and you will abandon the children he left with you!
Awake and you will receive a good reward.'
... His lovingkindness will never be forgotten;
... on him praise
...life and here will lie undisturbed;
At 60 years, taken live to his Father on the holy Shabbat and buried the following day, Sunday,
Nisan in the year 'raiser of the orphans' [5564/1804].

So the questions are, who was Yitzhak ben Yisrael Yaacov (Isaac ben Israel Jacob?)? do you know more about him and his good deeds? if so please let us know.

To see the entry on Genpals.com go to Yitzhak ben Yisrael Yaacov

Posted by CemeteryScribes.com No comments: Links to this post

Welcome to our blog.

We have started this as a place to publish items that would not really fit in with our main website which is a database of inscriptions from Jewish Cemeteries throughout the UK, including mini family trees created from a variety of sources. Along with general photos of the cemeteries and short histories.

So we hope they interest you as much as they do us.

Technorati Profile
Posted by CemeteryScribes.com No comments: Links to this post