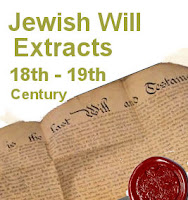 SynagogueScribes are delighted to announce a brilliant new addition to our special section featuring Secular Records.

Ranging from 1682 to the late Nineteenth century, from towns across the United Kingdom and  places as far afield as New York, Jamaica, and Australia, from the wealthy slave-owner to the humble general dealer, from Silversmiths and Quill Dressers, Book Sellers, Publicans, Orange Merchants and  Cattle Salesmen, these abstracts reflect the extraordinary diversity of Jewish life across two centuries.

You can search for individual names by selecting "Jewish Will Extracts 18th – 19th Century" on the main search page for Secular Records - this will bring up persons of the selected name who have left a Will, or persons with that name featured in Wills left by others; or you can browse the full list from the link further down the same page.

We cannot always be certain of the "Jewish" bona fides of those we have included; some, such as Rebecca HART MYERS (NA 585) were clearly born Jewish but died outside the faith: others, such as Isaac SCHOMBERG (NA 612) were possibly even more removed from the faith of their forebears: others leave us pondering.   Our editorial policy in this matter has been based strictly on personal choice and should not be taken as conclusive one way or the other.

These extracts were prepared, and generously contributed, by David Alexander
Posted by Site99 No comments:

Burial Grounds at risk in the UK

Back in 2008 Jewish Heritage UK reported on 'Burial grounds at risk' with a list of 9 Jewish cemeteries:


CemeteryScribes has been able to record all remaining tombstones found at Bancroft Road, Lauriston Road, Sunderland - Ayres Quay and Wolverhampton - Cockshutts Lane. The latter 2 with the help of generous supporters of our project. We also have some photos of Ipswich - Salthouse Lane, Merthyr Tydfil - Cefn Coed, Exeter - Bull Meadow, Swansea - Mayhill and London - West Ham Cemetery.
As a result of local community efforts, restoration work is underway for Liverpool- Deane Road Jewish Cemetery and their hard work and dedication has recently been rewarded by a well-merited Grant from The Heritage Lottery Fund. Again, following a great deal of research and lobbying,  Bancroft Road is scheduled for restoration by Jeecs & the United Synagogues.
Obviously all restoration requires large amounts of money and in this day and age with our pockets being stretched in every direction its not always possible for the relevant bodies to put these tasks top of their lists.
However, there is no great cost involved in taking photos and that does at least serve as a form of preservation of what is there now. So if you are reading this and live near to, or plan to visit :
Exeter, Bull Meadow
Ipswich, Salthouse Lane
Merthyr Tydfil, Cefn Coed
Manchester, Prestwich Village acquired in 1841 - the second oldest burial ground in Manchester
Swansea, Mayhill
Birmingham, Betholom Row Cemetery dating back to 1823
Glasgow, Craigton Cemetery opened in 1880

Please take a few photos for us!
Posted by Site99 No comments:

Posted by Site99 No comments:

We at CemeteryScribes and SynagogueScribes fully support the idea of the UK Family Tree week which starts tomorrow 26th Dec 2010.

With the holiday season giving us all time to get together with family we all have the ideal opportunity to make some notes on family relations and find new ones.
Websites taking part in Start Your Family Tree Week are:
Findmypast, Genes Reunited, ScotlandsPeople and Eneclann.
Supporting Start Your Family Tree Week are:
The Society of Genealogists, The Federation of Family History Societies, Pen and Sword Books, BBC Who Do You Think You Are? Magazine, Your Family Tree magazine, My History, Family Tree Magazine, Who Do You Think You Are? LIVE, Pandigital, from you to me and Francis Frith.
To start finding your Jewish family tree, go to www.cemeteryscribes.com and use the basic search at the top left hand corner. Enter your family name and see what you find.
We have included mini family trees to help you identify your ancestors and you will also find details of their burial place and transcriptions of tombstone inscriptions.
The top 20 family names found on CemeteryScribes are:
1. Levy
2. Cohen
3. Jacobs
4. Davis
5. Isaacs
6. Harris
7. Hart
8. Solomon
9. Nathan
10. Phillips
11. Samuel
12. Moses
13. Marks
14. Joseph
15. Abrahams
16. Lazarus
17. Benjamin
18. Emanuel
19. Myers
20. Alexander

Then to do some further research go to www.synagoguescribes.com and search through the thousands of Synagogue records we have transcribed with the emphasis being on pre-civil registration records. As civil registration of births, marriages and deaths began on 1st Jul 1837 these are a must to get you back further.
You can also take a look at our getting started pages found here http://synagoguescribes.com/blog/getting-started/
Happy hunting and a very Happy New Year.
Posted by Site99 No comments:

When it comes to requests for help with family trees, we at www.SynagogeSribes.com are a pretty hard-hearted bunch.   We have to be: if we weren’t, we’d finish up spending all our time on other people’s genealogies,  leaving none for our core work of finding, transcribing and publishing Jewish community records and, with our other hats on, recording cemeteries for our sister site, www.cemeteryscribes.com So, mostly,  we refer  such queries to organisations and individuals more dedicated to this kind of work. However, we couldn’t resist  a cri-de-coeur from a researcher concerning an unidentified Ketuba, passed to him by his grandmother.

A Ketuba (marriage Contract) is handed to the Bride during the Marriage Ceremony and would remain in her possession throughout her lifetime and be passed to her children on her decease and, thus, remain rather private documents

http://www.jewishencyclopedia.com/view.jsp?artid=187&letter=K#552 http://www.galleryjudaica.com/articles/TradText.html
The Ketuba in question was quite plain and, fortunately, the personal details were easy to decipher.  As was to be expected, there were no English Family names on the document and the Hebrew patronymics, Moshe b. Meir and Hannah bat Uri (Aryeh), meant nothing to our correspondent.   That is until he looked at the dates on some civil marriage certificates that had, quite fortuitously, arrived by post that very day and, suddenly, the light dawned; the Ketuba belonged to his Great Great Grandmother’s sister, Hannah Emanuel, who married Morris Myers on 17 February 1864.

The matter might have rested there but, in writing to thank us, our correspondent gave us some details of  the parents of the Hannah Myers (nee Emanuel), whose Ketuba we had translated, and her sister Sarah, his own Great Great grandmother. They were Philip Emanuel and Abigail Simmons: two names which chimed with some records we had recently been studying.
The couple had married at the Great Synagogue on 1st September 1841 http://www.synagoguescribes.com/persondetails.php?value=5363
Abigail’s antecedents, Levy Simmon(d)s and Sarah Cohen http://www.synagoguescribes.com/persondetails.php?value=2792 had been relatively easy to trace. Philip, however, had proved impossibly elusive.   And elusive he remains. But something our correspondent spotted concerning the father’s name on Philip’s civil marriage certificate, sent us scurrying back to our SynagogueScribes database [www.SynagogueScribes.com] and over the next week or two we will see if this new line of enquiry leads us out of this genealogical maze, or if we continue to go round in circles, following one false trail after another.